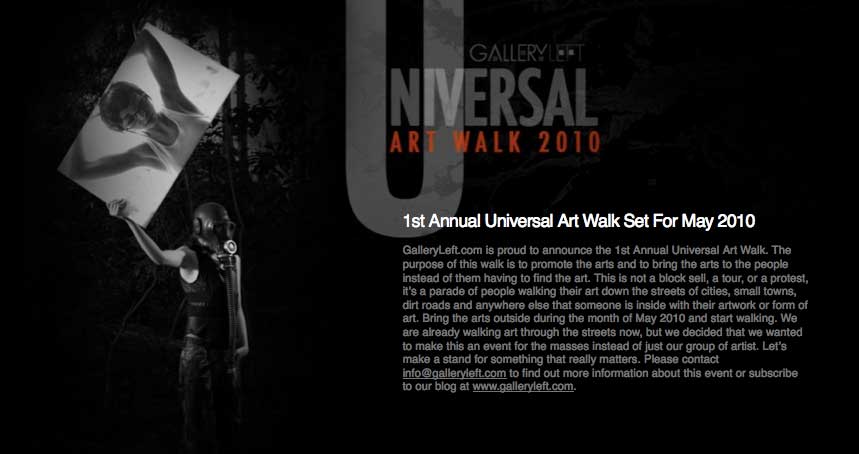 In 2010, I was into so many things to promote the arts, I almost forgot about this one. The 1st Annual Universal Art Walk set for May 2010. GalleryLeft is proud to announce the first Annual Universal Art Walk. The purpose of this walk is to promote the arts and to bring the arts to the people instead of them having to find the art. This is not a block sell, a tour, or a protest, it’s a parade of people walking their art down the streets of cities, small towns, dirt roads and anywhere else that someone is inside with their artwork or form of art. Bring the arts outside during the month of May and start walking. We have already been walking art through the streets now, but we decided that we wanted to make this event for the masses instead of just our group of artist. Let’s make a stand for something that really matters. The initial artists involved were Donald Perry, Daniel Nutley and Ian Gamache. This went on for three years before stopping because life stepped in. Today, I think this would turn into a protest for sure with all the crazy things happening around the world. When I first released this, the big boyz thought I was organizing a protest against something… I would go into more details, but then I would be back in the mix. Thanks for reading and make sure to come back often if you like a good or crazy story about life as an artist. Photo by Scott Smallin